Summer is wrapping up.

I had originally set off to do a bunch of outdoor stuff, primarily state park visits. That didn’t happen. I got wrapped up in long work days, small weekend trips to Portland, random day hikes, downtown strolls, and coming out to my dad…

The relationship with my dad has been a strained one, to say the least. Sadly, the only real memories that stick out in my mind are, his infidelity, hardly ever being home (see prior item), not showing up for my school events, arguing, and having to take my little brother to the E.R. twice… and he wasn’t there.

Add to all that almost ten years of not talking to him, and yeah… he hasn’t been that big a part in my life. And yet, I felt a need to reach out. His stroke and mild heart attack really made me rethink our relationship. I’m not exactly trying to make up for lost time, but I don’t want to lose an opportunity to make amends, to get to know my father before he passes. If you’ve been following my posts you’ll come to understand how much I hate regret. I don’t want to utter “I wish I had seen him one last time… I wish had that beer with my dad.”

Counting down the days for my dad’s visit, I got anxious. Not only was I going to see him for the first time in a long time, but I decided it was more than time to tell him I was gay. It was going to be one hell of a reunion. In fact, I put him in a hotel just because it felt so strange at the idea of having him around.

I picked him up from the airport and was taken aback by his greeting; a strong hug and a small kiss on the cheek. I can’t remember the last time my dad ever displayed that sort of affection toward me. “It’s good to see you, mijo,” he said.

His three-day visit went quick. I wasn’t exactly eager, or set on telling him I was gay early on in the visit. I wanted to delay it, partly afraid, but also not wanting to distract from the visit. I didn’t know my dad well enough–not who he currently was anyway. I knew him as the absentee father, the hard-ass of my youth, but I had no real way to gauge how he’d react to my coming out. So, I played it by moment, by conversation, by day.

On the first day we strolled through downtown Seattle, the Seattle center, space needle, monorail, and Pike Place. We had a few drinks and caught up on family affairs–mostly his side, my uncles and the like. I learned of his mild heart attack, his shoulder surgery, and how my uncles have been ravaged by health issues. (A thought I keep in the back of my mind as I continue to make working out my routine from now on). 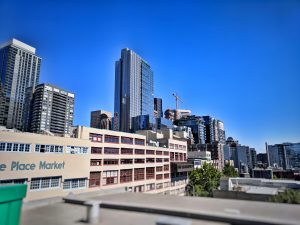 I tell him what I’ve done since I left California. What I do for a living. My likes, dislikes, and general interests. It’s like getting to know a stranger. Sure, he’s my father and he knows me, as a child… as the child I was. But now, we’re getting to know each other as adults.

There’s a hint of sadness behind his smile as I list out all the things I’ve done without him. He talks about my siblings, what they’re up to and how involved he’s in their lives. I can’t help but say “I didn’t have that growing up.” Sure tt’s something that could have gone without saying (or could it?), but a part of me did miss out on all the things my siblings and half siblings experience. It’s not entirely without understanding…

“I get it, dad,” I say. “You guys were kids” Referring to my parents. “Seventeen, when you had me. What did you guys know about having kids and raising them? Kids having kids.” I lay back in my seat and take a sip of my beer. “I was the first… I was the burnt pancake.”

My dad let’s out a laugh. “That’s funny. I’ve never heard that, but it’s true. We were kids having kids.”

The old wounds have scabbed, but not entirely healed. The hard rough edges of our past have mostly calloused over. I understand the situation my parents were in, foreign and naive in their youth. It’s not entirely forgivable, but I understand. The only thing we can change about the past is how we look at it.

I took my dad wine, ale, and whiskey tasting in the local area; in moderation. He held his own and I didn’t even see him tipsy. Though he was certainly more chatty.

“Well, that’s cuz you got your oldest who is all grown up,” I say.

We end that day with dinner and I drive him back to his hotel. He’s about to get out of the car when I say, “I need to tell you something dad…”

“I’m gay, dad.” The worlds fly out–pushed past all the fears of his possible reactions.

He nods and continues to smile. “Why did you wait until today to tell me?”

“I dunno. It’s been so long since I’ve seen you, I don’t know you anymore. I had no idea how you’d react.”

“I knew. Your sister told me.”

I’m somewhat disheartened that my sister said something; not really her place to share the news. And yet, perhaps she told him to “soften the blow” so I let it go.

“Look,” he continues. “I love you. You’re my son. It doesn’t matter. I don’t understand it, but i love you. I’m very proud of you and who you’ve become.”

There’s a slight burden lifted, a tinge of emotion flowing through me that I can’t quite place. I’m not entirely sure what it is that I feel and as quickly as it comes, it goes. Many would ask what I felt and while most expect this jubilant explosion of joy and relief… I almost felt nothing. And THAT, if anything, is sad and just further drives just how strained our relationship is. This isn’t to say I’m ungrateful at the outcome, or unappreciative of my time with my father. But fuck, people, give me a break. Allow me to feel how I feel and stop dictating what emotion this mind is supposed to feel.

“Thank you for all of this–this has been a dream come true!”

His last words before closing the door bring a smile to my face. I’m glad I spent the time that I did with my dad. He enjoyed his trip, all the while understanding–like my mother when she visited–why Seattle is home.

“I kept telling your mother that you weren’t coming back after you moved to Seattle,” dad says.

“Yeah, I’m not coming back.” I look out into the sound as we ride a ferry. “This is home. This is where I’m going to die.” 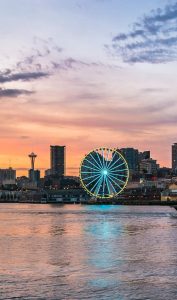 I have some bad news.

Are you sitting down?

No one is coming to save you.

You see. For all the excuses mankind waves at its atrocities, disguised with a bow of ignorance, we hold on to some hope that someone/something will save us. That someone will come to mend the broken, to right the wrong, to heal our wounds.

This world is broken in many ways. And while the onslaught of the media’s bad news can be overwhelming and near soul crushing (seriously pushing me toward a nihilistic and misanthropic existence), I remind myself of my fondness for humanity.

The good we’re capable of:

The amazing things our bodies can do:

The beautiful poetry of a good dance:

In every amazing feat, kind gesture, and moment of joy, I have to remind myself of the awe.

“That’s my species! That’s what we can do–that’s what I can do!” (Granted the last part is contingent on practice and discipline, but it’s all within capabilities of a human)

The blood, the dna, coursing through my body… the building blocks are the same and I have to–must–remind myself about the beauty in that. I have to remind myself just how connected we are. Or else drown in despair.

Walking down the street, or watching people on T.V., I go, “Wow, her smile is gorgeous. That gymnast, she executed a flawless move. That astronaut, fearless in the face of uncertainty… that’s us. That’s me.”

The pride swells, if only to stabilize me in an otherwise eroding foundation.

I’m reminded of a short story by Andy Weir (Same author from The Martian), called The Egg. It resonates with me, conveying a lot of what I’m trying to point out. You should read it.

I leave you with one of my favorite clips from the movie Contact. Where the main character Ellie meets her dead father (she makes contact with aliens who disguise themselves as her father to establish a non-threatening form of communication). It has one of my favorite quotes:

“You’re an interesting species. An interesting mix. You’re capable of such beautiful dreams, and such horrible nightmares. You feel so lost, so cut off, so alone, only you’re not. See, in all our searching, the only thing we’ve found that makes the emptiness bearable, is each other.”