Sun-baked earth stretches into some far off mountains. In the distance, splitting the horizon where the desert meets a cloudless blue sky, sits a stone tower. A few human bones litter the ground on the way to the tower. The bones disintegrate with a gentle hot breeze. The gaping maw of a skull widens as the wind eats at it, until the skull and desert sand are one. 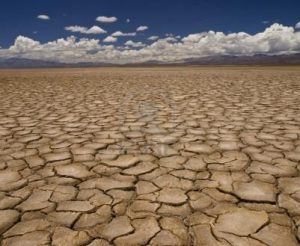 At the base of the tower one gets a better grasp of its scale. As the sun sets, the tower casts a shadow farther than the eye can see. The tower’s base is wide, almost impossibly so as the tower appears to have no definitive edge.

A cave-like entrance, just large enough for a person to pass through, has fractured the tower. Cold wind escapes the stone scar, disturbing a set of bones at the entrance.

Inside is a frozen landscape. This isn’t a tower, it’s a giant wall surrounding this place. Barbed wire and trenches dot the area. Frozen bodies in various poses lay strewn across the frozen tundra. 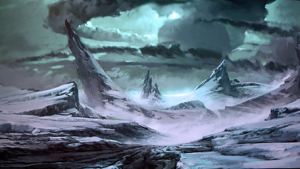 A gunshot in the distance. The sound thunders and echos off the ice-scraped black walls. The sound lingers in the air, dissipating slowly.

At the center is a dark stone castle. A steep, bottomless, canyon encircles it; a moat. 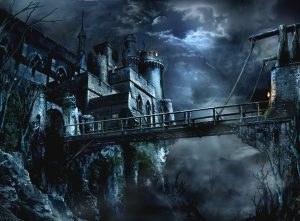 “What do we got?” asks a man in a black ski mask. He peeks over the stone wall of the tower. He examines the ice barren ground.

“Another hopeful,” says a man at the far end. He’s hunched near a stone ledge with a rifle in hand. He squints and steadies his gaze. “I think I got ’em.” He adjusts his blue ski mask and sets down his rifle.

A man in a white coat and hoodie darts out from behind a mound. He fires two shots before retreating for cover. The shots hit the wall behind Black-ski-mask.

“That son of a bitch!” Black-ski-mask dives behind a wall. “I thought you said you got him?”

“I’m on it, I’m on it!” Blue-ski-mask readies his rifle, cocking it and scoping the mound. He fires three shots. “Come on, come on,” he whispers. “Come out.”

The White-coat man below jumps out, firing more shots and making his way down another mound.

“Did he just get closer?” asks Black-ski-mask.

“That drawbridge needs to be raised,” Blue-ski-mask says.

Black-ski-mask chuckles. “That bridge actually can’t be pulled up. Besides, you know He’d never want that.”

White-coat man pulls back his hoodie, dusting off his black hair of debris.

“Fuck it.” Blue-ski-mask fires, hitting White-coat squarely in the chest, knocking him back. “I got ’em!” Blue-ski-mask stands up, raising a fist with his chest out.

Black-ski-mask gives a slow clap. “He was kinda cute, wasn’t he?”

A single shot rings out. Blue-ski-mask drops his rifle. A glazed look in his eyes. Blood dripping down the side of his head. His body falls limp.

“Shit!” Black-ski-mask drops behind the wall once again. He pulls out his sidearm and peers over the wall, watching White-coat rub his bloodless chest. “That asshole has a vest! When the fuck did they start coming in with vests?”

Men from the other surrounding towers now join the fight, firing at White-coat. White-coat slides into a trench for cover, narrowly missing the onslaught. Bursts of snow and dirt shoot from the ground as its peppered by bullets. A single black object escapes the trench, landing at a nearby tower.

“Grenade!” a call from the tower.

An explosion rips part of the tower, sending chunks of stone in the air.

“What kind of grenade was that?” Black-ski-mask’s eyes widen. He takes two deep breaths and returns fire. However, White-coat is quick, running along a mound for cover and taking out someone in another tower. “He’s doing this with a pistol? How is he doing this? Who is he?”

“Let him,” says a man behind Black-ski-mask. It’s a man in a black trench coat and mask. “Let him come.”

Black-ski-mask cocks his head back. “But, sir–”

“Stand down,” says Trench-coat. “I got this.” He unholsters the sniper rifle from his back.

Everyone understands and they all fall back. With rifles at their sides, they stand firmly poised. A calm overtakes the area. Trench-coat readies his rifle, loading it and adjusting the scope. He watches White-coat run from mound-to-mound, getting closer to the bridge with each sprint.

Trench-coat points his barrel and rests his cheek against the cold gun. Closing an eye, he focuses on the cross-hairs as they scan the area below. Trench-coat’s breath is steady and slow, floating visibly in the frigid air. He holds his breath momentarily. The air is still. He exhales and whispers, “I’m sorry.”

White-coat falls as the bullet casing hits the floor.

Trench-coat gets up and holsters his rifle behind his back. He looks over at Blue-ski-mask’s body, now in a small pool of blood. “Someone take care of that.” He turns to the center tower of the castle. “I need to go check Him.”

At the end of a long hallway, Trench-coat stands before a door. A white light escapes the edges of the door as the knob is turned. Trench-coat closes his eyes and quickly steps through.

A large verdant garden of trees and flowers lies before him. He walks toward a stream, his dark outfit contrasts against the vibrant colors of the area. 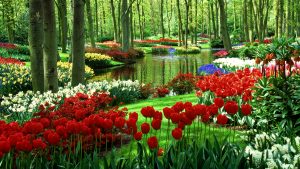 “Is that you?” asks a child. It’s a young boy. “Where did you go?” The brown-eyed child in suspenders reaches out to Trench-coat. The boy’s hand is dwarfed by Trench-coat’s.

“I had to take care of something,” says Trench-coat.

“Was there someone out there for me?” the boy asks.

“No. Just someone passing by.” Trench-coat let’s go of the boy’s hand and kneels down at the stream. He cups water in one hand while he lifts his mask with the other.