A man in a black trench coat stood at the edge of a lake. He looked out, with his back to Branli.

“So, you made up your mind I see,” said the man without turning back.

“Is that you, Devon?” Branli asked uneasily as he slowly approached.

“Who else?” he replied with a slight chuckle. Devon kept on staring out at the view, as if speaking into the wind. “I can’t believe I found you again.”

“I still don’t believe any of this. It’s just… so weird. Even if it were true, do you understand just how many questions that would–”

Branli took in the scenery if only to humor Devon.

The vast lake before them was surrounded by lush green mountains. A few tiny islands broke the horizon of the deep-blue water.

“Devon…” Branli began. He wanted him to turn around, to get a glimpse and trigger a memory. Branli wanted desperately to remember Devon. Perhaps if he could see his face it would all come flooding back.

“You have to explain all this,” Branli kept on.

“No!” Devon said almost defiantly. “You have to explain all this.”

A bright flash of light and it was all violently taken away.

“Explain this,” it was Andrew’s voice.

Branli woke up, his laptop -having been unplugged- was dark in his lap. Andrew tossed a picture frame to Branli.

It was a photograph of Branli in a tuxedo, smiling. Branli jerked his head back and frowned in bewilderment. He not only had no recollection of taking the photograph but there was something distinctly odd about the photo. The photo was dated Summer of 1929.

“Hmm,” was Branli’s initial response. “Pretty neat trick.” He had nothing else to say. His mind was fighting thoughts, at odds with what Devon had told him. “Where’d you get this?” Branli redirected.

“The wall in the hallway,” Andrew answered. “Whose house is this? This isn’t just a random Bed and Breakfast you picked out is it?”

Branli ignored Andrew and got up to see for himself. He found Ashanty already admiring some of the photos.

“You said he’s from your past?” Ashanty inquired. “You sure you don’t remember him? For someone who doesn’t like to get pictures taken, he sure got a lot of you.”

Branli didn’t answered, pretending to be preoccupied with the photos. They varied; Branli with a group of friends, him toasting a crowd from a podium, him in a suit in front of a crowd, him in front of a lake. The dates ranged from 1926 – 1930.

Branli took the photo of the lake, recalling his dream of Devon.

Branli turned the photo of the lake around. There was another image with a note: You once told me that walking through Europe was like looking at this photograph. 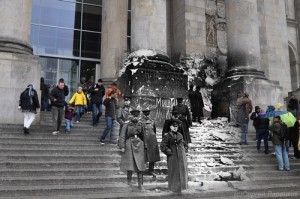 “He really does like to photoshop,” Andrew commented as he looked over Branli’s shoulder. “Which goes back to my question… whose house is this? You didn’t just randomly rent it did you?”

This site uses Akismet to reduce spam. Learn how your comment data is processed.